Throughout 2020, white supremacist propaganda in America nearly doubled over the course of a year, according to a report from the Anti-Defamation League’s (ADL) Center on Extremism. The report comes after a consistent surge in white nationalism.

“Hate propaganda is a tried-and-true tactic for white supremacists, and this on the ground activity is now higher than we’ve ever previously recorded,” ADL CEO Jonathan A. Greenblatt said in the report. “White supremacists appear to be more emboldened than ever, and the election year, the pandemic and other factors may have provided these extremists with additional encouragement.”

Last year, ADL reached its record number of documented white supremacist incidents, averaging over 14 cases per day. A total of 5,125 cases were reported in 2020 compared to 2,724 cases in 2019.

The organization, which has been tracking racist indoctrination since the early 1900s, reported that 2020 saw white supremacist propaganda in every state except Hawaii. The highest numbers were recorded in Texas, Washington, California, New Jersey, New York, Massachusetts, Virginia and Pennsylvania. 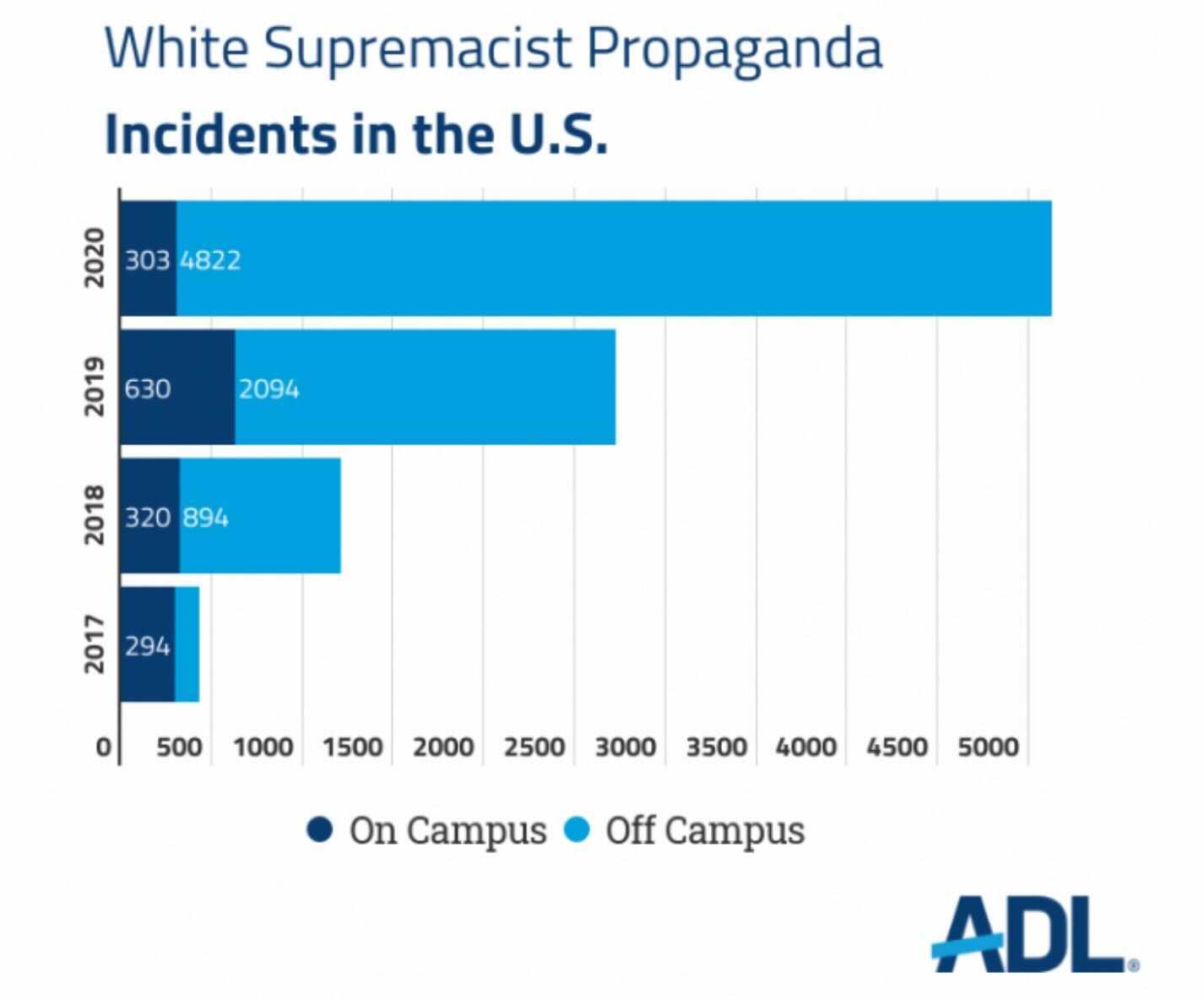 “They use the uncertainty and fear caused by [crises] to win over new recruits to their ‘us vs. them’ narrative, painting the ‘other’ as the cause of their pain, grievances or loss,” Picciolini said. “The current uncertainty caused by the pandemic, job loss, a heated election, protest over extrajudicial police killings of Black Americans, and a national reckoning sparked by our country’s long tradition of racism has created a perfect storm in which to recruit Americans who are fearful of change and progress.”

These accused parties are responsible for distributing flyers, stickers and banners with anti-Semitic and anti-Black sentiments. NJEHA is notorious for this type of rhetoric, circulating posters that read “Antifa is a Jewish communist militia,” “Black Crimes Matter” and “Reject White Guilt.”

“Propaganda gives white supremacists the ability to maximize media and online attention while limiting their risk of exposure or arrest,” Oren Segal, vice president of ADL’s Center on Extremism, said in the report. “The literature helps to bolster recruitment efforts and spreads fear by targeting specific groups, including the Jewish, Black, Muslim and LGBTQ+ communities, as well as non-white immigrants.”

In ADL’s report, Greenblatt referenced the disturbing Unite The Right rally which took place in Charlottesville, Virginia, in 2017 as a precursor to the surge in white supremacist ideologies.

“As we try to understand and put in perspective the past four years, we will always have these bookends of Charlottesville and Capitol Hill,” Greenblatt said. “The reality is there’s a lot of things that happened in between those moments that set the stage.”

Greenblatt also acknowledged that the alarming spike in hate crimes is something that must not be sugar-coated.

“There’s no pixie dust that you can sprinkle on this like it’s all going to go away,” he said. “We need to recognize that the roots of this problem run deep.”

In an effort to dismantle and combat white supremacy following the Jan. 6 Capitol riots, the ADL announced its Protect Plan to help assuage xenophobia while protecting civil liberties.